A catchment is composed of more than just a series of streams and the surrounding landscape. For it is people, both past and present, who help to weave the fabric of the catchment and they change it, use it, and live within it. For us to effectively restore and manage the web of social-ecological interactions within the catchment, we must appreciate and engage with the human histories of the place.

A brief enlighten on the Khoisan Community 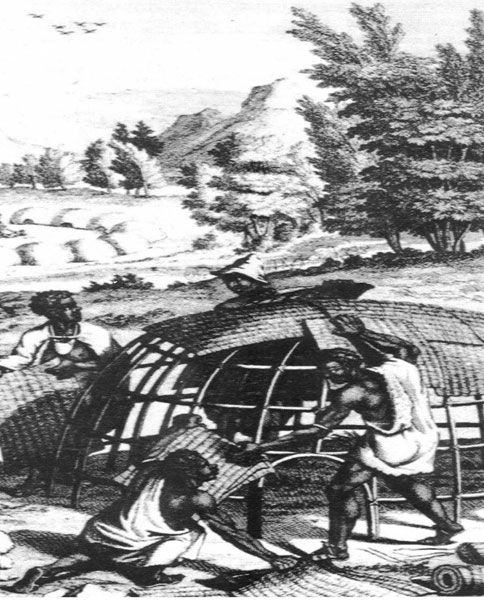 The first humans to live and participate in the catchment were the Khosian people. These people were not only the First South Africans, but they also represent the oldest lineage of our human species.

The Khosian lineage originates from Bushmen and Khoikhoi, and most research indicates that the Khoikhoi’s ancestors were related to the Bushmen living in the area of today’s northern Botswana and southern Zambia.

When the first European settlers arrived in 1652, they rapidly stole much of the cattle herds and grazing land that the Khoikhoi had spent centuries looking after. The colonisers brought with them smallpox, which in 1713 resulted in an epidemic; within two generations many of the Khoikhoi had died of smallpox. Most of the survivors of the epidemic were forced to turn to work as farm labourers for the colonisers.

Beginning with the entrance of the European colonisers, many of the historical narratives of the Khoikhoi were undermined, underrepresented, and silenced. This oppression of histories persists into the present, and we must make the effort to uplift the narratives, both historical and contemporary, of the Khoisan. Their histories have influenced the catchment for centuries; they are valuable and should be treated as such 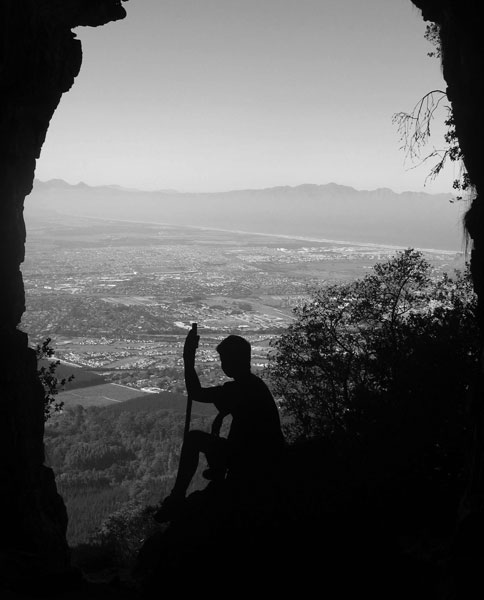 One of the many beauties of urban water bodies is their ability to bring diverse communities together, urging them to enjoy and protect the natural space. The Princess Vlei wetland is one such place.

Princess Vlei is a wetland that derives its name from the story of a Khoi Princess overpowered and raped by Portuguese sailors, whose tears flowed down the mountain to fill up the vlei. It is one of the few Khoisan myths about a natural feature in our city that still persists, passed down orally through multiple generations.

Princess Vlei is the first substantial water body in the massive wetland system extending through Grassy Park to Strandfontein. As a wetland, it offers a range of ecosystem services such as mitigating winter floods, providing habitat, purifying water, and retaining nitrogen, lowering the demands on public sewage and water works. These functions are particularly urgent now for building resilience to climate change.

But its values extends far beyond the purely ecological benefits. Princess Vlei provided, and continues to provide, a valuable social amenity amidst the ugly context of apartheid and oppression. In the 1960s, under the Group Areas Act, coulored people were forcibly removed from their homes, and some were placed near Princess Vlei. Resulting was a severely segrated community around the wetland, with coloured people living on one side and white people living on the other. For coloured people facing grave injustices, Princess Vlei was one of the few natural recreation spaces where they could go to fish, play, and gather for braais and picnics. It became a place where the community could come together and help one another through the pain of being forced into mean precints because of racist policies.

During and post-apartheid, authorities neglected and degraded Princess Vlei. They widened Prince George Drrive, which polluted the vlei and cut it off from Grassy Park, Lotus River, and Parkwood, decreasing both its ecologic and social value.

However, when plans to build a shopping mall on the banks of the vlei began to surface, the community sprung into action. The different neighborhoods formed a diverse coalition with the purpose of saving Princess Vlei. Together, they rallied around the wetland and established community events, developed educational programs, lobbied for protection of the wetland, and helped to restore its natural biodviersity.

This powerful community has enabled the Princess Vlei to continue to help sustain the fragile floral kingdom of the Western Cape, which happens to be a world heritage site. A 2008 Biodiversity Network study established that Cape Flats Dune Fynbos – the most critically endangered vegetation in South Africa – could be restored at Princess Vlei. Such a restoration effort would do a lot toward protecting this fragile ecosystem. The restoration process has already begun, thanks to grass-roots efforts by the communities surrounding the Princess Vlei. They have entitled their collaboarative rehabilitation project “Dressing the Princess.”

The Princess Vlei serves as a reminder that maintaining valuable natural areas as recreational amenities can be key to their survival. The ability of the Princess Vlei to pull communities together is due to the wetland’s importance as a favorite recreational spot. Many of the people who have worked hard to protect Princess vlei did so because they grew up there, played there, swam there, fished there. It’s accessibility to local communities enabled its preservation.

The Princess Vlei community can serve as a model for ways we can work together to protect the catchment. Conservantion and restoration are ongloing commitments, and the vlei community continues a discourse delving into the meaning and value of the vlei. This engagement and commitment to restoration has resulted a vision for Princess Vlei that acknowledges its history and is deeply rooted in the community.

Please note that although Princess Vlei is technically outside of the demarcated catchment, historic information suggests that it was once part of this catchment. Also it has major impacts on the water within the Zandvlei catchment and therefore is included as an integral part of the catchment. At the recent Zandvlei Catchment forum meeting (11/11/2015) the Princess Vlei was voted in as an important catchment treasure. 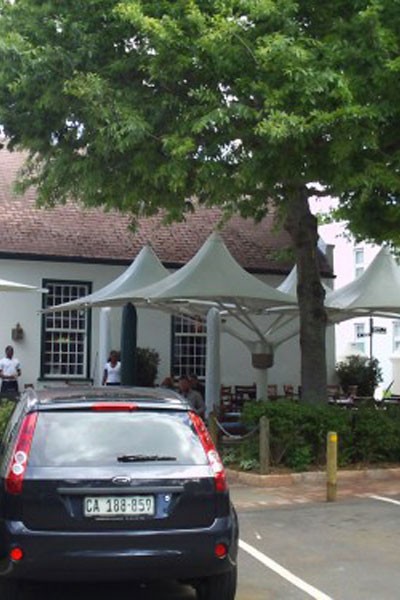 In 1714 Alphen was a property of about 11 acres, probably growing fruit and vegetables. There is a suggestion it was also a nursery for vines. This was the area where the the Brommersvlei stream and the Burgersboschspruit joined the Diep River, the main source of water for the farm.

Various buildings were put up during the 18th, 19th and 20th centuries around the Great Square, the oldest being the Jonkershuis.  The 18th century Manor House is unusual in that it is double storeyed with a carved and marbled front door probably designed by Anton Anreith. The Alphen Estate is a National Monument.

We don’t know the exact dates of many of the buildings, the exception being the Mill on the banks of the Diep River where the following inscription was found on a beam: “Johannes Balthasar Breuning uit Hessen Darmstadt ampt Grimberg van de Colbe mole geboortig heft deze mole getimmert anno 1772”.  This is the oldest Mill in the South Peninsula. The wheel has disintegrated, but archaeologists found a section of it during restoration work in 1997 and it has been measured and redrawn so it can be reconstructed one day.  Part of the Burgersboschspruit was diverted through a leiwater into a koffieklip dam north of the cellars.  The dam then fed water to the mill and powered the wheel.  It also led water to a dam east of the Manor House.  That dam has long since been filled in, but the family plan to restore it.  The koffieklip feeder dam was unfortunately destroyed when the Council built Peter Cloete Ave.

Alphen had a number of owners and grew across the years.  In 1850 Dirk Cloete and his wealthy wife, Katarina Reneira bought the property.  Dirk increased the size of the property further until it spread northwards over Wynberg Hill and included what is now Glen Dirk farm, Monterey / Oosterzee Heights and the areas where the Constantia Village shopping centre and the sports grounds stand.  It became the most successful wine farm in its time.

Later, sections were given to Dirk’s two younger sons, other bits hived off and sold and the rest of the farm was subdivided for housing in the 1960’s leaving the original 11 acres, the heart of the estate.  Without a farm to support it the family had to find other uses to maintain the Manor House, cellars and other buildings on the property.  The hotel came first in 1963, (it has five stars) and the pressing and maturation cellars are now A grade offices.

The popularity of the Alphen Trail, which starts at the on the south-eastern boundary of Alphen and continues along the Diep River, has increased the traffic to the area and we are in discussion with the City to provide extra parking on the open space next to the start of the Trail. The Alphen Trail – both sides of the Diep River – draws the most walkers of all the greenbelts in Constantia, and links with other trails to the mountains in the west. The eastern seaward down river trails are being developed as part of the Source to Sea project.

Part of the attractiveness of the Alphen trail is the restaurants where walkers go for coffee, a drink or a meal.  Turn left at the start and end of the trail and walk along Alphen Drive to the entrance of the estate and into the magnificent Great Square.  Find your way to La Belle Restaurant in the Jonkershuis or the Rose Bar on the Mill terrace overlooking the southern gardens.  Sit outside under the oaks in good weather, summer or winter and inside, particularly in the fire warmed La Belle when it turns chilly. It is not only the trail and refreshments to be enjoyed.  There are many treasures to be found at Alphen for the curious.

Written by Nicky Cloete-Hokins (2015). Current owner of the Alphen Hotel. 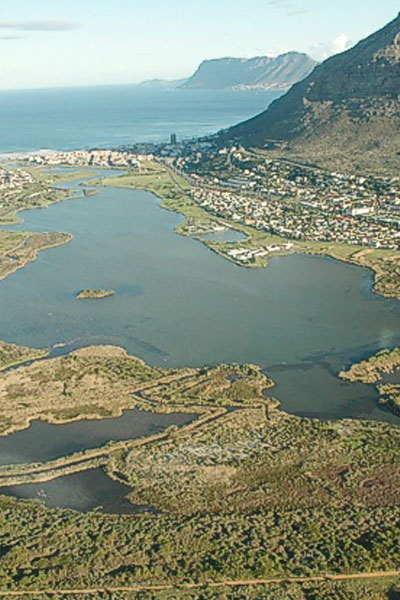 In 1974 George Begg an ecologist employed by Anglo American, approached the Cape Bird Club (CBC) to help monitor the bird life at Zandvlei while the Marina da Gama was being built.

Profs Gerry Broekhuysen and Winterbottom (UCT ornithologists) were group leaders on these counts, co-ordinated and organised by Alan Morris with the data sets recorded from December 1974 to May 1983.

The terrestrial back section of Zandvlei was the area designated as a bird sanctuary and was named Wildwood Bird Sanctuary because of all the dense tangled thickets of invasive alien vegetation. The official acceptance of Wildwood by the City of Cape Town from Anglo American was in 1977. An Advisory Board was set up and the CBC was represented at the quarterly meetings. In November 1980 the area had been fenced and pathways with bridges and a hide were built by club members. In April 1978 Alan Morris started the monthly hacks to help the Citys effort by demonstrating the clubs interest in the sanctuary. These hacks continue to this day led by Gavin Lawson. In 1987 the sanctuary was increased in size from 11 to 22 ha

Historical survey Dutch maps from the 1700s of the Constantia valley and Zandvlei area:

These photographs of maps and survey paintings were supplied by James Forsyth and are from a book titled; Grote Atlas van de Verenigde Oost-Indische Compagnie – Comprehensive Atlas of the Dutch East India Company by Bea Brommer with contributions by Leon Hattingh, Dan Sleigh, and Hein Zielstra. The maps are housed on the Zandvlei Trust website.

Although not a main attraction within the catchment – visit the Friends of the Meadowridge commons home page to see the history of this unique patch of land.